The place-names research in the Galloway Glens Landscape Partnership covers a very specific area: seven parishes in the area of the River Dee and its tributaries.  The eastern limit of our research area is formed by a river, the Urr Water.  This river runs southwards from Loch Urr forming much of our eastern limit. 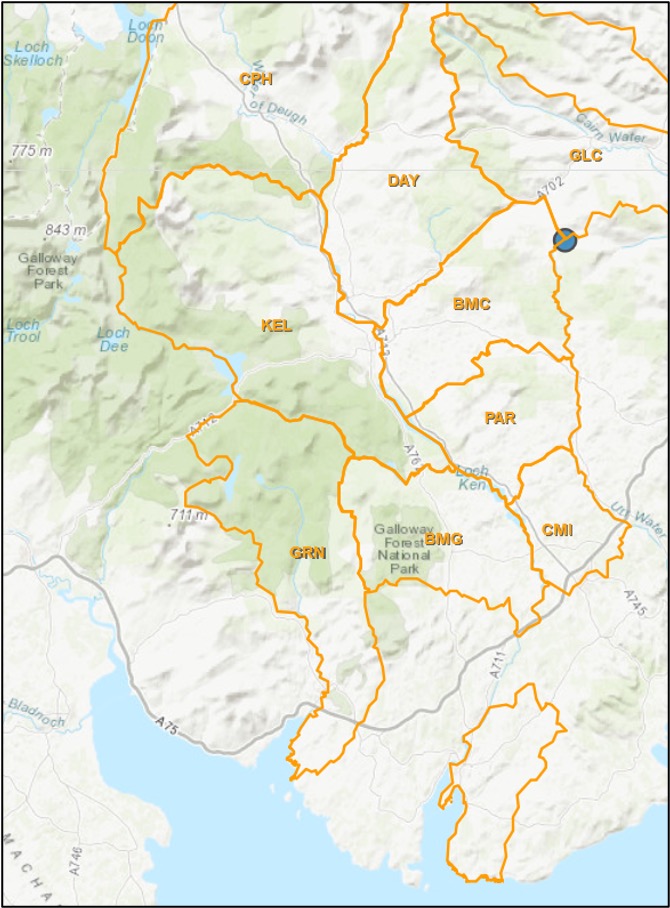 The parishes of the project area (and a couple of others): Carsphairn (CPH), Dalry (DAY), Kells (KEL), Balmaclellan (BMC), Parton (PAR), Crossmichael (CMI) and Balmaghie (BMG).  Loch Urr (marked with a blue dot) at the head of the Urr Water, is on its eastern boundary.  Note: Girthon (GRN), Kirkcudbright and Glencairn (GLN) are not part of the project area.

Let’s think a bit about the name Urr, which appears in both the river-name (Urr Water) and the loch name (Loch Urr), and is probably Gaelic.

Here are our early forms of the names.  The Loch appears as:

The river appears as:

The river flows south out of the loch.  They clearly share the same element in their Hur, Orr, Urr forms.   It appears to be the Gaelic word oir ‘a border, edge, boundary’.  In Old Gaelic this word was or, but it appears as ur in dative case.  We should also consider the possibility, however, that the element is Northern Brittonic or, with the same range of meanings: ‘boundary, edge, limit, margin’ etc.. It appears for example in the wonderful northern Brittonic poem Y Gododdin in its praise of the warrior Cynon mab Clydno: Glod heb or, heb eithaf – ‘praise without bounds, without limit’.   It survives in modern Welsh ôr ‘boundary, limit’.

So, we might want to ask, if the Urr is a boundary, what territories is it the boundary of?  When did it function as a boundary?  It might help to start off by looking at how it is a boundary today.  Of course, like many substantial rivers, it is the boundary of several parishes.  On its right (west) bank are the parishes of Balmaclellan, Parton, Crossmichael and Buittle.  On its left (east) bank are the parishes of Dunscore, Kirkpatrick Durham and Urr.

So for seven parishes it serves as a boundary.  But the same is true of most substantial rivers – the same is true of Ken and the Dee, for example, which run through the middle of our area and mark a boundary of all seven of our parishes.  The fact that the Urr marks parish boundaries is unlikely to have justified calling it by that name.

The answer to this lies in the origins of the diocese of Glasgow in the twelfth century.  During the late ninth and tenth centuries, most of south-west Scotland had been part of the British kingdom of Strathclyde, whose later expanded realisation was known as Cumbria or Cambria in Latin documents, as Fiona Edmonds (2014) has shown.  But a new people, the Gall-Ghàidheil (the origin of the name Galloway) began to expand southwards out of their earlier core territory in the lower Clyde and parts of Argyll.  The Gall-Ghàidheil (their name means ‘the foreign Gaels’) took control of the coastal areas of what are now Renfrewshire, Ayrshire, Galloway and Dumfriesshire and pushed inland, forcing the British kingdom back further east and creating what we might now call ‘Greater Galloway’ – an area stretching from Strathgryfe on the lower Clyde down even as far as Annandale in Dumfriesshire.

It is hard to give a clear time-frame for this process, but twelfth- and thirteenth-century sources are fairly clear about the extent of this Greater Galloway.  It seems that for at least part of this period, the Rinns and Machairs of Galloway may have formed a distinct polity within the Galloway area, but all these people formed part of an intermarrying, warring, jostling matrix of communities who were Gaelic-speaking but also in some respects (politically, ecclesiastically, culturally?) Norse-looking, hence ‘foreign Gaels’ or Gall-Ghàidheil.  This political-cultural sphere in the region of the Irish Sea extended from Dublin via the Isle of Man, through Greater Galloway and up into the Hebrides.

Meanwhile the kingdom of the Scots during the eleventh century also began to put pressure on the Strathclyde/Cumbrian Britons from the north.  Máel Coluim III (1058-1093) may have been able to take control of Cumbria during the 1060s or 1070s, pushing down into the area of Carlisle.  The combined impact on Cumbria of the Scots and the Gall-Ghàidheil was so dramatic that we hear of no king of the Cumbrians after the 1050s, suggesting that this former kingdom with its own king it had disappeared as an independent political entity.

But the ‘kingdom of the Cumbrians’ still had plenty of life in it as an idea.  It was an idea particularly important to the rulers of Scotia – at this stage meaning the area north of the Firth of Forth – as they increased their control over Cumbria.  While Alexander I (1107-1124) ruled Scotia, his brother David ruled in the south as ‘Prince of the Cumbrian kingdom’ (Cumbrensis regionis princeps).  This is not the first exercise of Scottish royal power over the old kingdom of Cumbria, as we have seen, but it is when the historical record begins to appear in slightly more focus.  As the native kings of Cumbria had disappeared, David’s charters show how Scottish power asserted itself by presenting the bishop and church of Glasgow as the heirs of the former kingdom of Cumbria.  Now that there are no longer kings of Cumbria, David as secular ruler (with the bishops as church rulers) is making a strong claim that the diocese of Glasgow – the ecclesiastical territory, with its lands and many churches – is the abiding presence, almost a kind of ‘reincarnation’, of that ancient British kingdom (Broun 2004).

This means that when we read twelfth-century assertions about the diocese of Glasgow, its lands, its possessions, its churches, we can understand them as assertions about the expansion of Scottish power under a ‘Cumbrian’ flag.  When we read about the ‘kingdom of the Cumbrians’ we can understand it as an expression of Scottish ambition to control the south-west of Scotland.  And this Scottish control is an expansive one, often at the expense of the Gall-Ghàidheil.  I have argued elsewhere, for example, that the cult of St Conval at Inchinnan was invented in the twelfth century to assert Glaswegian (and therefore Scottish) control over Strathgryfe – basically modern Renfrewshire – which had hitherto been in Gall-Ghàidheil territory (Márkus 2018).

We can see further penetration of Galloway under Earl David’s rule when he grants the teinds of his cheese-tribute (cain) from Galloway (Galweia) to the newly founded abbey at Selkirk (David I Chrs. no. 14), though we cannot tell which parts of Galloway are implied here; and later, as king, he grants the teind of his cain of cattle and swine from Strathgryfe, Cunhingham, Kyle and Carrick to Glasgow Cathedral (David I Chrs.  no. 57).  It is likely that such grants express his overlordship of a continuing entity of Galloway rather than direct rule.  We see a similar consolidation of Scottish control in a document created by David – one of his first having been made king of Scots in 1124 – in which he grants all of Annandale (Estrahanent) to Robert de Brus, though in this case David is presumably granting rights in a territory over which he does have direct rule.  This had been the most south-easterly part of earlier Gall-Ghàidheil territory, and now we see it firmly under Scottish royal control (David I Chrs. no. 16).  That great sweep of Gall-Ghàidheil territory, from the Gryffe to the Annan, all round south-west Scotland, is being eroded by Scottish expansion.

Another glimpse of this political expansionism is from a document probably of the early 1120s, listing lands belonging to Glasgow Cathedral (David I Chrs. no. 15).  In this document David describes himself as ‘prince of the Cumbrian kingdom’ (Cumbrensis regionis princeps).  He has arranged an enquiry into the lands which Glasgow Cathedral used to have, based on the testimony of some of the ‘older and wiser men of all of Cumbria’.  He also notes that his enquiry concerns ‘the lands belonging to the church of Glasgow in all the provinces of Cumbria which were under his lordship and power, though he did not rule all of the Cumbrian kingdom’ (terras ecclesie Glasguensi pertinentes singulis Cumbrie provinciis que sub dominio et potestate eius erant, non enim toti Cumbrensi regioni dominabatur).  The implication of this last phrase is probably that there are parts of what David considered to be Cumbria over which he thought he should have power, that he has not yet managed to obtain control of them, and that he will do so when he can.  This may refer as Fiona Edmonds has suggested (2015, 52) to parts of the old Cumbrian kingdom south of the Solway in the area of Carlisle (where David actually died in 1153), or to parts of Gall-Ghàidheil territory over which he would claim authority – or both.

In this list of lands belonging to Glasgow cathedral, ‘David prince of the Cumbrian kingdom’ lists the lands of Edyngaheym among his territories.  This is particularly interesting from our point of view and the question of the Urr Water, because it is Edingham.  This is now the name of a farm just outside Dalbeattie, its lands lying on the east side of the Urr.  But in David’s time Edingham was not just the name of a small farm.  Edingham was the name of the mother-church of the whole area between the Urr and the Nith (see Brooke, 1987).  By the 1120s this territory was under the control of the church of Glasgow, but that control was probably a fairly recent development.

We also encounter a lord called Dunegal of Nithsdale (Dunegal de Stranit) in about 1124, probably a native Gaelic-speaking lord whose secular territory may have coincided with the ecclesiastical territory of Edingham (David I Chrs. no. 16).   His two sons appear as witnesses in a charter about the cain of much of Galloway in c.1136 (David I Chrs. no. 57) – Radulfo filio Dunegal, Duvenald fratre suo.  Their territory, part of the old Greater Galloway, was evidently now subject to David, prince of the Cumbrians.

Here, I would suggest, we are witnessing the origin of the name of Urr Water.  At some point before, probably shortly before, this moment in the early twelfth century, the Urr has become the boundary between a shrinking Gall-Ghàidheil territory to the west (under the ‘kingship’ of Fergus) and Cumbrian-Scottish territory to the east under the princely authority of Earl David. 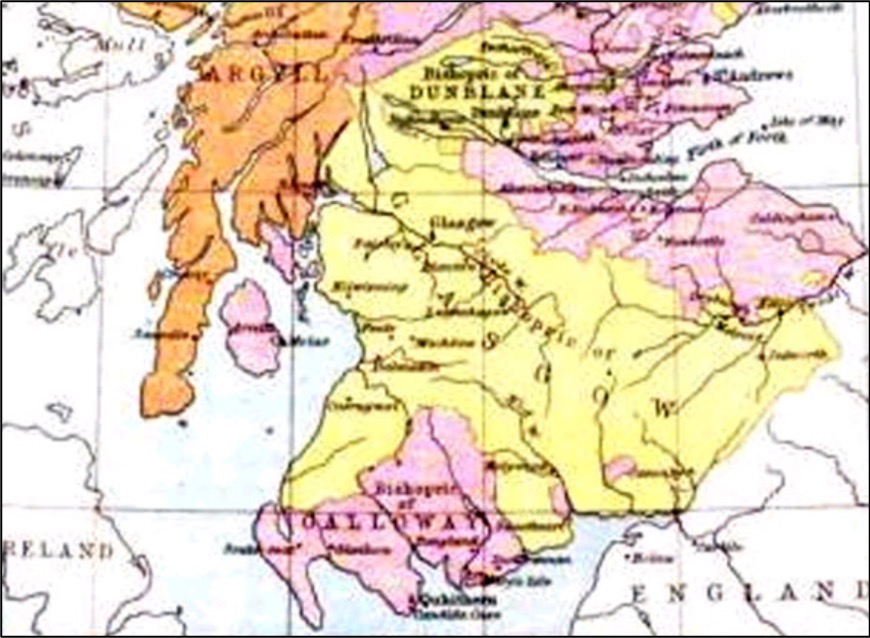 W.F. Skene’s map (1887, 418) of the dioceses of southern Scotland shows how Glasgow has encroached on the former kingdom of the Gall-Ghàidheil (Galloway) by the time of King David. 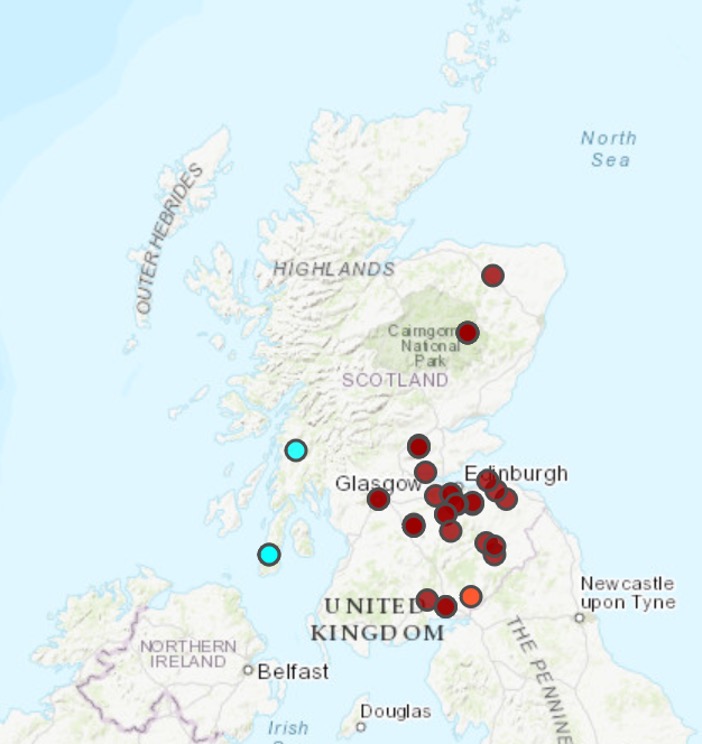 And, for the sake of comparison, the distribution of place-names referring to St Kentigern (alias Mungo), the patron saint of Glasgow. Note the rough similarity of the southern part of the distribution to the territory of the diocese.

Brooke, Daphne (1987), ‘The Deanery of Desnes Cro and the Church of Edingham’, Transactions of the Dumfries and Galloway Natural History and Antiquarian Society 62, 48-65.