I took a walk up into the hills of Carsphairn recently to try and find some stones – up in the northern part of the Galloway Glens project area.   I thought I knew where I was going, but I couldn’t find them.  So I came back down again.  Just as I got to the bottom of the hill I met Mr McMillan of Eriff on his quad-bike, who told me exactly where to find them.  So I went back up the hill again, and thanks to his directions I found them almost immediately.  By that time the clouds had cleared, and the sun was sinking.  By the time I found the stones the light was clear and warm and raking at a nice angle across their faces, picking out the details of the carving rather nicely.  Perfect condictions for a couple of photographs 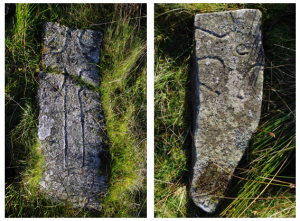 Who put these stones here and why is a question I’m going to have to look into in the future.  They are, as far as I can tell (and as far as other commentators have remarked) early medieval.  But what artistic traditions to they reflect?  Are they British or Anglo-Saxon in style?  Or is that question itself a bit misguided, as if we could identify two clear and distinct styles of carving at this period with one-to-one ethnic associations?

We may have a name for the place where these stones lie.  Roy’s map of Lowland Scotland made in the 1750s shows a place called Kiltersin at or near the site of these stones.  This seems to be Gaelic cill tarsuinne ‘’church or burial ground of the crossing’.  The crossing here may refer to the old pack-road that was the main route north from the Galloway Glens, running along the hillside just below these stones.

So far I have found no other references to this name.