In twelfth-century and later records of churches in Galloway, we occasionally come across a territory called Desnes.  It appears in various spellings (Desnes, Desenes, Denes, Deesnes, Desense) but I will adopt Desnes as the standard form.  It is the name of a territory which, as we shall see, extended along the southern part of Galloway from the River Cree to the River Nith, and it included the southern parishes of the Galloway Glens project area.  In what follows I will reflect a little on what we might learn from this name.

First of all, what language was it coined in, and what does it mean?  Daphne Brooke thought that it was Gaelic deas neas meaning ‘southern promontories’ (1987, 48).   While this is just about formally possible (at least it would be if we read it as a singular ‘promontory’) it is a very odd construtction.  And we should bear in mind that the obsolete Gaelic word neas ‘a promontory’ is not a native word, but a loan from Old Norse, and it is vanishingly rare as an element in Gaelic place-names.  William J. Watson in his magisterial Celtic Place-Names of Scotland (1926) does not cite a single Gaelic place-name containing this element.   But there is a significant number of place-names in Scotland which contain the element nes – that is the Norse, not the Gaelic word – meaning ‘a promontory, a headland’.  J. G. Scott proposed that Desnes is a Norse name, that it contains the name of the River Dee (1993, 132), and that it means ‘promontory, headland or point of the Dee’ – in Old Norse Des nes.   This seems highly likely, though it is also possible that the name is even older, formed during the Northumbrian domination of this area: the river-name and Old English næs ‘promontory etc.’

The ‘promontory’ in question might be the whole area of land which juts out into the Solway at the mouth of the Dee, comprising broadly speaking the parishes of  Borgue, Kirkcudbright and Rerwick (see Map 2 below).

Another possibility is that the nes is a much smaller promontory at the mouth of the Dee – perhaps St Mary’s Isle (which in spite of its name is not an island but a sharp narrow promontory) immediately to the south of the early medieval Northumbrian settlement of Kirkcudbright.  If this is the nes that gave Desnes its name, it may have been because it was an early medieval power-centre (before St Mary’s Priory was founded there in the twelfth century), controlling access to the Dee river system.  On the other hand, much of the landscape around St Mary’s Isle and Kirkcudbright is low-lying and composed of river-silt.  As a result it is likely to have been in a state of flux over the centuries, and it may be that St Mary’s Isle really was an island when the monastery was built on it in the twelfth century, and therefore not the nes.  If so, the nes named in Desnes may be the promontory at the river-mouth on which Kirkcudbright itself sits.  Timothy Pont’s survey of the area in the 1590s, published in engraved form in Blaeu’s Atlas in 1654, clearly show both Kirkcudbright (Kircubright) and St Mary’s Isle as part of a continuous single nes in the middle of the basin of the Dee estuary. 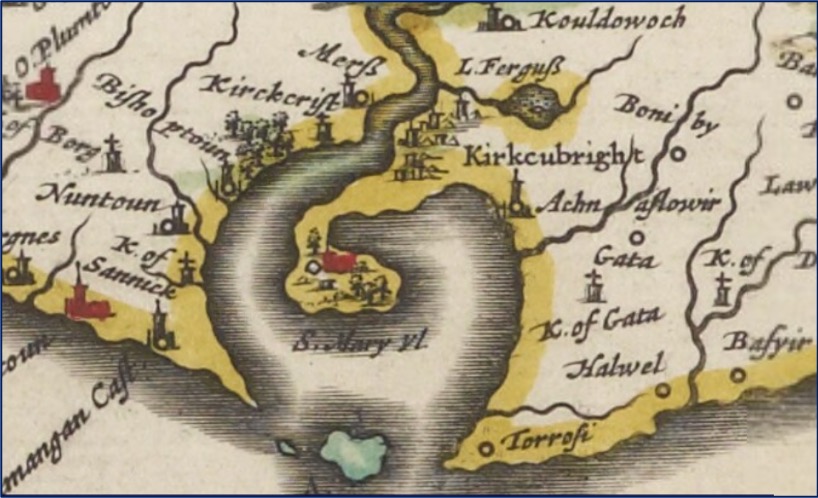 Map 1: St Mary’s Isle and Kirkcudbright, from Blaeu’s Atlas, map of Galloway (1654). (Website of the National Library of Scotland).

It is worth mentioning in passing, if this proposal about Desnes is right, another potentially Norse name in Galloway which refers to the main headland to the west of Desnes.  The medieval deanery of Farnes is recorded in the thirteenth century as containing the parishes from New Luce and Kirkcowan in the north to Glasserton, Sorbie and Whithorn in the south.  This is again a dramatic nes or promontory jutting into the Solway.

The proposed Norse origin of the names Desnes and Farnes sits well with other territorial names of Norse origin in this coastal, such as the parish names Rerwick and Southwick (both in the territory of Desnes) and Sorbie (in Farnes).

The second thing we might notice about the name Desnes is that it usually occurs as the name of a church territory, or rather church territories.  That does not mean it was originally coined as an ecclesiastical name, however, and at least one occurrence of the name suggests it had a political or secular aspect too.

In the 1160s, King William confirmed a grant by Uhtred, son of Fergus, of the church of Kirkcudbright to the newly founded Holyrood Abbey in Edinburgh.  Kirkcudbright was said to lie in Desenesmor, that is the ‘large or great’ Desnes (Gaelic mòr) (Holyrood Liber no. 27).  This immediately reveals that already Desnes has been divided up, and the area around Kirkcudbright is the ‘greater’ part – which might refer to its size, or perhaps more likely to its importance.

At around the same time (1161 x 1174) Uhtred granted some land (what is now New Abbey parish at the mouth of the Nith) to one Richard son of Troite (Ricardo filio Tructe).  In return for that grant he requires from Richard the service of one knight and eight pounds of silver ‘as long as I have to render cain of/from [the?] cro and of/from Desnes Ioan’ (del cro et de Desense Ioan) (Ragg 1917, 218).  Here Desnes Ioan is the eastern part of Desnes, and the name is probably ‘Desnes belonging to John’ – John is Iohannes in Latin, Ioan in Welsh (or Cumbrian if you prefer), and is also attested as Ioan in medieval Gaelic.  We will come back to this John in due course.

Now, I would like to refer you back to the previous blog on this page (9 June) when I described how David Prince of the Cumbrians sought to expand his area of control at the expense of the rulers of Galloway in the early twelfth century.  You may remember this map representing Gall-Ghàidheil or ‘Greater Galloway’ territory in its former extent, adjacent to the growing kingdom of Cumbria.  Little by little David, his Cumbrian kingdom (or principality, now under the authority of the king of Scots) and his newly revived church at Glasgow, encroached on southern Galloway from the east, swallowing Annandale and Nithsdale, and assigning Edingham and the land between the Urr and the Nith to the bishopric of Glasgow – a sure sign that it was under David’s military and political control.

In the scenario I described there, the Urr Water became the boundary between the diocese of  Galloway to the west and the diocese of Glasgow to the east, ruled respectively by Fergus king of Galloway and David prince of the Cumbrians.   The Urr at that point was the limit of David’s expanding reach, but in fact we can see that David and his successors were trying to reach even further.   In 1179 Pope Alexander confirmed various churches and rights to Glasgow Cathedral, his ‘special daughter’ (filia specialis), and these included Glenken (Glasgow Reg. no. 51).  This suggests that the king of Scots had been trying to incorporate Glenken into his territory, but in fact he failed, as can be seen from the fact that the pope’s charter was ineffective.  Glenken did not become part of Glasgow diocese, but remained in Galloway.   In the same charter the pope also confirmed to Glasgow ‘whatever belongs to your jurisdiction in Galloway’ (quicquid tui iuris est in Galweia).  Again we can see the king of Scots trying to expand his jurisdiction into Galloway, detaching churches from the see of Galloway at Whithorn and attaching them to his own see at Glasgow.  Here the phrasing is a bit vague, merely indicating that Glasgow could have any churches which the king succeeded in loosening from Whithorn’s grasp.

So let us return to Desnes and see how that name fits into this narrative.  Here is a map of the area showing all the modern parishes and identifying which medieval deaneries they belong to.  Note that some of the medieval parishes no longer exist but have been absorbed into the surviving modern parishes – but that does not affect what follows. 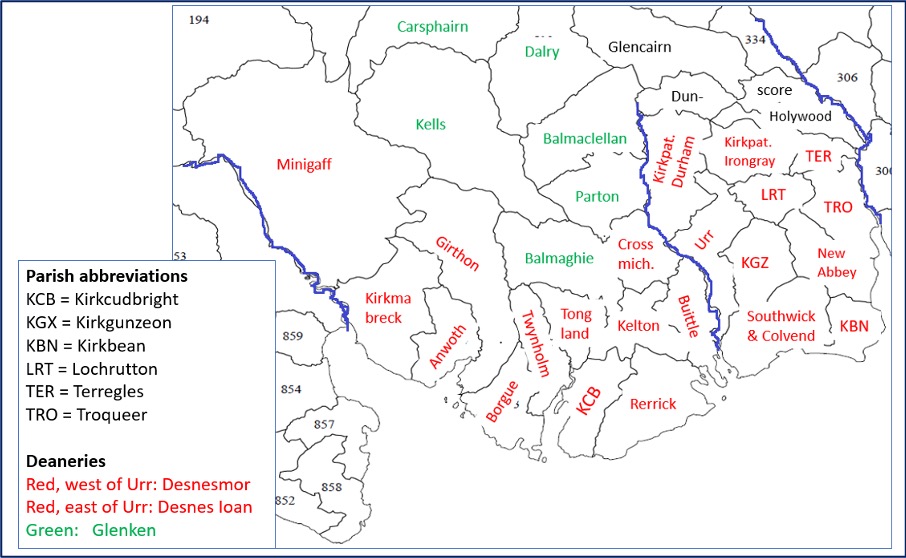 Map 3: The parishes of Desnes (Galloway and Glasgow dioceses) and Glenken

The parishes of Kells, Dalry, Balmaclellan, Parton and Balmaghie (in green) belonged to the deanery of Glenken – the one that the pope tried (and failed) to give to Glasgow.  The parish of Carsphairn, also in green, was created in the 1640s out of the northern parts of Kells and Dalry, so its territory also lay in Glenken deanery.

All the parish names in red on the map are part of the territory of Desnes.  To the west of the Urr Water was Desnes Mòr or ‘greater Desnes’ belonging to Galloway diocese.  To the east of the Urr Water was Desnes Ioan, as we saw from the charter of Uhtred to Richard, and all its parishes belonged to Glasgow diocese.  Sometimes these two parts of Desnes were mentioned in medieval sources with their affixes, mòr and Ioan, but quite often they are referred to simply as Desnes, and only the context tells us which of the two parts is being referred to.

The fact that Desnes gave its name to a wide territory which we must assume was only later divided up between Galloway and Glasgow/Cumbria dioceses suggests that the name and the territory is older than 1120, when we first see this division taking place.   It is the name of an originally singular jurisdiction within what is sometimes called ‘Greater Galloway’.  And if Desnes is, as I have suggested, a Norse name, then this confirms its antiquity, locating the name and the territory in a time when Norse-speakers were settling in this part of Galloway.  Of course, if it is an Old English name it (and the territory it names) is earlier still, possibly dating to the late seventh or eighth century.

Finally, while the name Desnes Mòr is transparent, the name Desnes Ioan is of particular interest in the context of the above narrative about when and how the division of Desnes took place.  As I have said, Ioan is a form of the name John, attested in both Welsh and Gaelic.  At the time when I have suggested that David and the bishop of Glasgow were encroaching on Desnes from the east, the bishop of Glasgow was called John.  He ruled that see from 1114 x 1118 till his death in 1147.   As Desnes Ioan was probably taken from Fergus of Galloway during that period and taken into John’s ecclesiastical jurisdiction, it seems likely (as Scott suggested in 1993) that it was actually named after him.