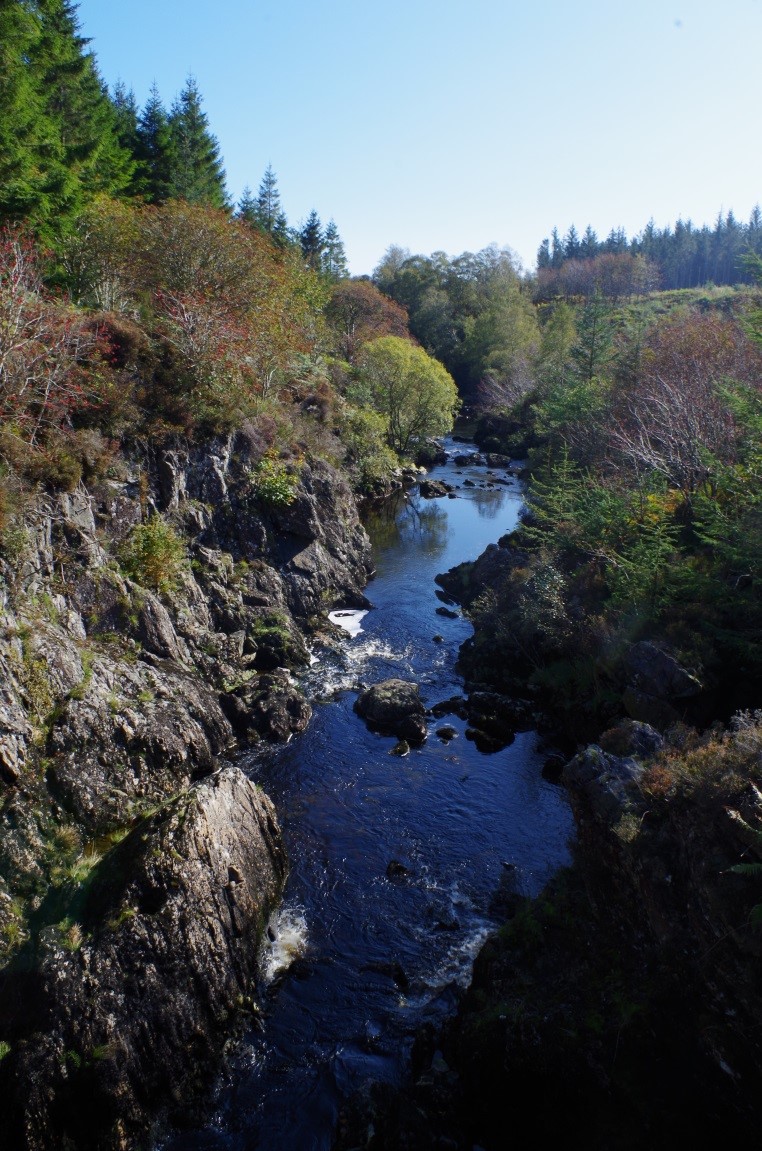 In most of Gaelic-speaking Scotland the word poll typically means primarily ‘a hole’.  Its range is slightly extended to mean not only ‘hole’ or ‘pit’, but more watery objects: ‘mire, mud, bog, pond, deep stagnant water, puddle’, and even ‘sluggish stream in peaty ground’, and such-like – basically, holes with water in them.  Its origins lie in Old Gaelic (OG) poll whose principal meanings are ‘opening, cavity, hole, pit’ (DIL). So poll talmain was a hole in the ground.  A key-hole was poll na heochrach.  A hole in a bog was poll móna.  And pollach meant ‘containing holes, perforated’.

(Note, however that the ultimate origin of OG poll was almost certainly British, as that initial /p/ sound is not native to the Gaelic-speaking world.)

It’s clear, then, that meaning of the word was originally to do with holes.  Even in modern Gaelic the stress is on the hole-y aspect, even if some of those holes are water-filled, and so are bogs, pools, ponds, puddles and so on.

In Galloway, however, and in some other parts of southern and eastern Scotland, the word poll appears in place-names which refer to clear-running and lively streams.   Here are some names from the Galloway Glens project area:

And so on. There are about thirty such names in the Galloway Glens area.  We can ignore the additional word burn attached to these names.  That was just a later explanatory term.   Clearly the burns were originally simply called Polmaddy (poll madaidh), Polshagg (poll seabhaig) and so on.

These burns are not ‘pools’ or even the ‘sluggish streams in peaty ground’ mentioned above.  They are lively, energetic, sometimes powerful and fast-moving burns.  This is quite a change in meaning from ‘hole’.  One of our burn-names, Garpel, means ‘rough burn’ (garbh-pol), stressing the flowing character of the water, perhaps over a stony bed.

How did this happen?   Why is Gaelic poll, with its range of hole-related and pretty static meanings, used in some parts of Scotland as a word for such lively streams?

The Scottish historian Geoffrey Barrow was aware of this problem (1).  Observing the distribution of poll names in eastern and southern Scotland, and in northern England, he appealed to the old British tongue that had been spoken here before Anglo-Saxon, before Gaelic, and before Scots.  He suggested that Gaelic poll in the sense of ‘lively stream’ was in fact a survival from Northern British (in which he included Pictish).  It was ‘so well established that it survived the appearance of Old English, Gaelic and Older Scots’.

The fact that many of our poll-names have second elements which are Gaelic shows that this was not just a matter of the survival of old British burn-names.   It means that the British word *pol in the sense of ‘lively stream’ was borrowed with that sense to form Gaelic poll in these areas.  It became a word in the Gaelic lexicon and was used to coin new Gaelic stream-names.

But there is a problem here.  Anyone who speaks modern Welsh (the language descended from our early British language) will understand that the British word *pol (now pwll in modern Welsh) does not mean ‘stream’.  It means (as does its Gaelic derivative poll) ‘hole, pit, depression’, and sometimes this may be filled with water or mud, and be a ‘pool, puddle, pond’ (2).

So if Barrow is right and a British *pol meaning ‘lively stream’ underlies the creation of later Gaelic stream-names it must have been a now lost northern British dialactal usage with this meaning, which was different from that which shaped modern Welsh.

Barrow’s map of Scottish poll-names shows their distribution throughout southern Scotland and then northwards up the east coast, through what was once Pictland (3).  This is somewhat reminiscent of the picture offered by Simon Taylor in his essay on Pictish place-names (4).  The divisions among P-Celtic languages are not necessarily between British and Pictish, but may (as here) be between southern British on the one hand and Pictish and Northern British on the other.  Our poll-names in Galloway might suggest a regional linguistic continuity, long before Gaelic was spoken here, between the Pictish north-east and the British-speakers of the Galloway Glens.  This northern dialect usage of British *pol would then have provided a substrate for the later regional development of Gaelic poll with this particular meaning.