It is hardly radical to observe that the Galloway Glens is particularly rich in bogs. After all, this is why there is a whole project within the Landscape Partnership devoted to Peatlands. Accompanying this richness of boggy terrain – current and historical – is a diversity of words for referring to it, with place-name elements in various languages to be found, but especially Scots: bog, flow, moss. The last of these, moss, is particularly well represented in the survey area of this project, appearing in nearly 30 names, both as a generic (i.e., the place-name feature being referred to), as in Barend Moss, Bargatton Moss, Sunkhead Moss; and as the specific (the element modifying the generic), in names such as Mosshead, Mosspark, Moss End. In these names the element mos(s) is from Scots (or perhaps in some cases Scottish Standard English), meaning ‘boggy ground, moorland’, but also ‘a peat bog; a stretch of moorland allocated to tenants for cutting fuel’. Quite a number of these names attach the moss in question to the farm on whose land it lay–such peat-bogs were an essential and valuable source of fuel and much more in the local economy. (Gilbert Márkus explored this aspect in one locality in a previous bog-blog, here.) 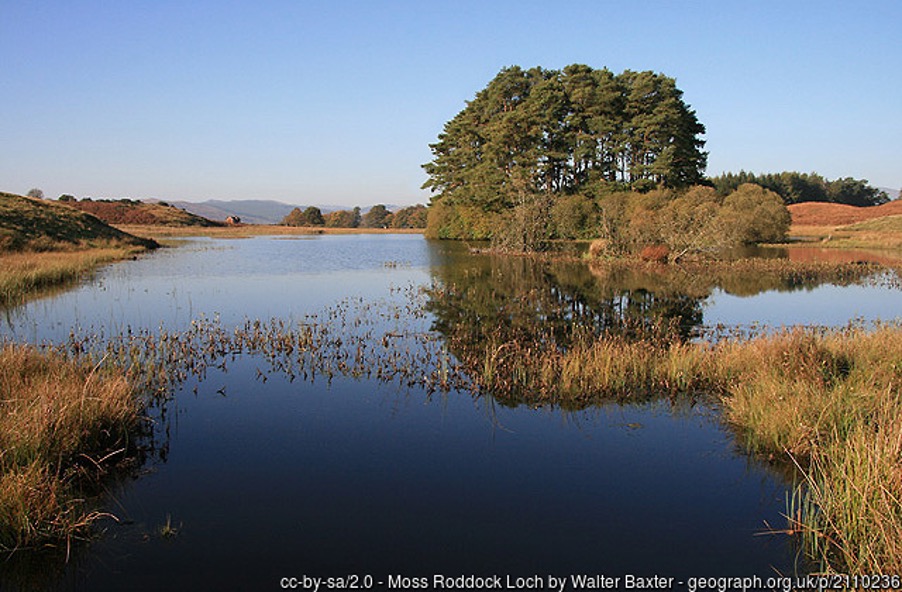 There are two names in our study area which are a bit different, however, Moss Raploch and Moss Roddock, the latter only found now in the name of Moss Roddock Loch. In these, moss comes first, but is clearly the generic (‘which moss?’ Moss Raploch; as opposed to ‘which park?’ Mosspark, where moss is the specific). The specifics in these names, Raploch and Roddock, could conceivably be lost farm names to which these names applied, but there is no evidence of this. The word order (generic followed by specific) is what we would normally associate with the Celtic languages (here, Gaelic and Northern Brittonic or Cumbric), as opposed to the Germanic languages (here, Old English, Old Norse and Scots/Scottish Standard English), where the word order of place-names is usually specific followed by generic, as for instance in the name Green Moss.

In fact, if we pan out from our immediate study area, we can see that there are quite a number of clearly Gaelic place-names using moss as a generic in south-west Scotland more widely, particularly in Ayrshire.

Most famous, perhaps, is Mossgiel near Mauchline, well-known as a farm on which Robert Burns worked for a time (and where he wrote ‘To a Mouse’), and lately as an excellent organic milk producer. Early forms of this name (e.g. Mosgauil 1654, Blaeu) suggest the second element was Gaelic gabhal, ‘fork’, perhaps from its place on a prominent fork in the roads leading from Mauchline to either Kilmarnock or Tarbolton (there’s also a Mossgavel in Colmonell, Carrick). Moscow, near Kilmarnock, is famous for more humorous reasons, but despite its Russian appearance this too may be a Gaelic name. W.J. Watson (1926, 378) suggested its second element to be G coll  ‘hazel’, so ‘hazel moss’ (though the name may in fact be of 19th-century manufacture: see note 1).

Other Ayrshire names of this sort are Mossblown near St Quivox (perhaps G blathan ‘small flower’, or bleoghann ‘milking’), and Mossgennoch Wood in Dailly parish, perhaps from G geanach ‘pleasant’. There are also examples in Lanarkshire, such as Mossminning in Lesmahagow, attested as early as the 12th century (as Mosminion; I’m not sure of the second element), and Mossmulloch (from G mullach ‘top, head’, appropriate since it sits high above the Calder Water). There are names further north in Scotland containing this element as well, especially in the north-east, for instance Mosstodloch in Moray, or Mossbrodie in Peterculter. Best known north of the Forth, perhaps, is Mossmorran in Fife, now controversially the site of a massive petrochemical plant. 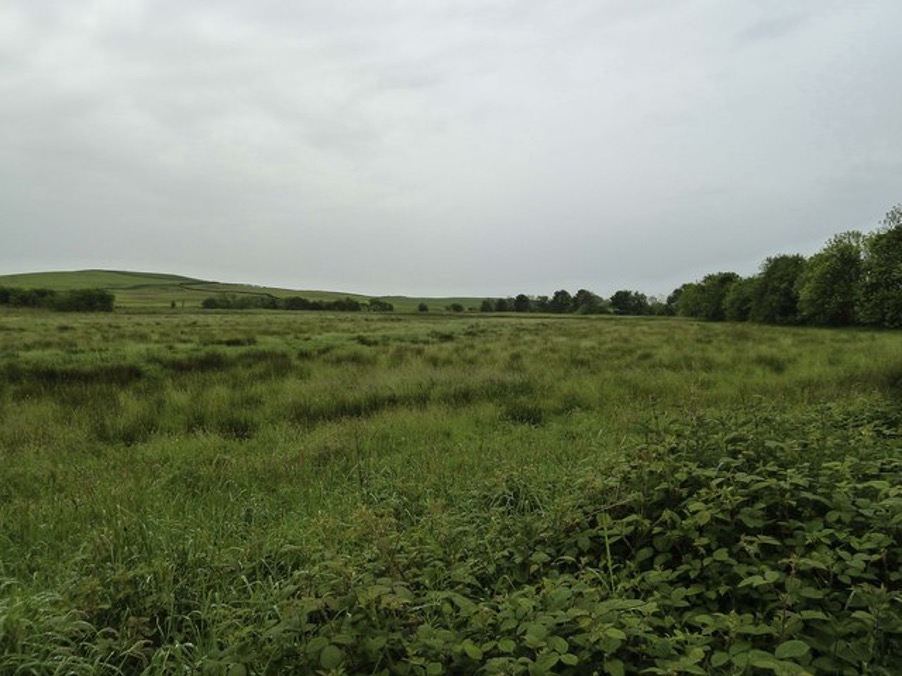 MOSS NAE (from geograph.org.uk/p/4015619) © Copyright Andy Farrington and licensed for reuse under creativecommons.org/licenses/by-sa/2.0

In the full Galloway Glens area we see such names clearly in evidence. A few examples will make the point. Moss Nae / Mossnae on the Borgue/Twynholm parish boundary may have G agh ‘heifer, hind’ as a second element (probably in the plural, ScG *mos nan agh; Early Gaelic *mos na n-aige); or perhaps àgh ‘battle, conflict’ or àgh ‘good fortune, prosperity’ (*mos an àigh) – unfortunately there are too many good options! The nicest examples are perhaps the contrasting pair of mosses which face each other further south across the Borgue/Twynholm border: Mossmaul (from G mall ‘languid, placid’) and Mossfeather (G feadhair ‘savage’). (Note 2) 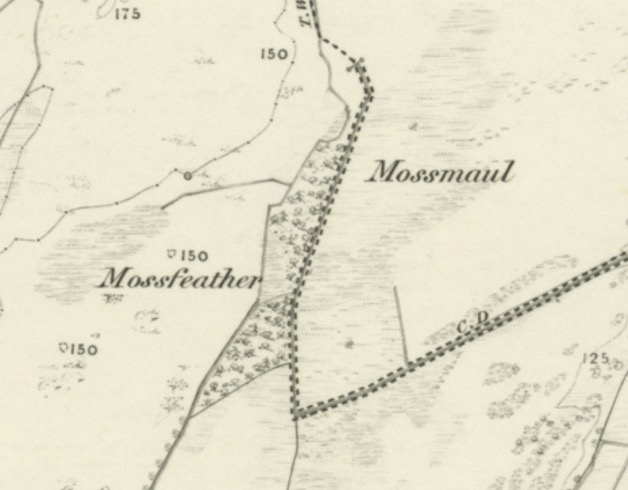 So, what is going on with these names? Judging from their elements and their word order, they are clearly Gaelic names, but moss is not a Gaelic word. The explanation best known among place-name scholars is that of the great W. J. Watson, in his Celtic Place-Names of Scotland (1926, p.378), who explained this element as being from the Brittonic word found in Welsh as maes ‘field’. He may have been correct in a few examples, for instance in Peebleshire and Roxburghshire (Mossfennon, Mosspeeble, Mosspaul), though even with these the proposal has problems (see Note 3). Aside from the Gaelic specifics in so many names, the biggest stumbling block to this interpretation is that very few of these locations lend themselves to the description ‘field’, and pretty much all of them are bogs or mosses, or were in earlier times.

Instead, John MacQueen probably had it right, in a neglected passage of an article from 1956 (p.141), when he suggested that we are in fact dealing with a loan-word from a Germanic language into Gaelic. He suggested either Old English mos ‘moss, bog’, or Old Norse mosi, with the same meaning, but of course moss is also a word in Scots. Older Scots mos does seem to be attested quite early, being found in 12th and 13th century charters, so this could be the source of the proposed loan-word into Gaelic, but the distribution of the examples in south-western Scotland suggests to me that it is more likely that many of these names were coined before the 12th century, the period from which the term ‘Scots’ is usually employed. There are several examples in Cunninghame, for instance, a region where Gaelic looks to have been receding already by the middle of the 12th century. The window for coining these names in the northern part of Ayrshire seems quite narrow if it is from Scots, and so the word will most likely have entered Gaelic usage in the south-west from either Old English or Old Norse, more likely the former. It is worth stressing, strongly, that this does not mean these names are either Old English or Old Norse names—they have simply taken the word into Gaelic from one of these languages, and used it to form place-names. It is also worth stressing that the Gaelic word created through this loan, *mos, seems only to have been used to form place-names, and did not come into common use.

But why do this? Gaelic had plenty of words for bogs, most prominently mòine, which can also be found in Galloway place-names like Minnigall (mòine gall, ‘the bog of the boulders’ or perhaps, ‘of the foreigners’), Minnydow (mòine dhubh ‘black bog’). The answer may lie in the point made at the beginning—that mosses were very much part of the rural economy. It may be that mos in the sense of a tract of peat-bog to which there were certain tenurial rights was something introduced, or finessed in a particular way, in south-west Scotland, entailing the importation of a new word to describe this feature of the landscape and its human ecology. For my money, the most likely trajectory would be for the word to have been introduced from Old English, given the duration and breadth of that language in early medieval south-west Scotland. It would have been adopted from resident Old English speakers as a place-name word, then, by the Gaelic speakers who subsequently settled the area in the period between the 9th and the 12th century. (note 4)

To return to our two examples from the Galloway Glens survey area, Moss Raploch and Moss Roddock. We should see these then as Gaelic names. The second element of Moss Raploch is probably ràpalach ‘noisy, bustling’. Moss Roddock is more difficult, but one might want to propose an adjective, rodach, based on the Early Gaelic word rota ‘bog-water, bog-stuff’. Whatever the exact meaning of these names, they, and the other Gaelic words using *mos, help illustrate the complex give and take of the various cultures who inhabited and used the land in Galloway in the early middle ages. 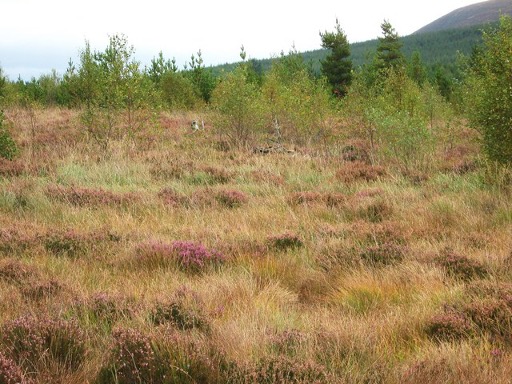 MOSS RAPLOCH (from geograph.org.uk/p/1574942) © Copyright Ann Cook and licensed for reuse under creativecommons.org/licenses/by-sa/2.0

(Note 1) Sad as I would be to bid farewell to Moscow, Ayrshire, as a Celtic place-name, it has to be admitted that there is not a great deal of evidence for this settlement existing before the 19th century, and there are traditions suggesting it was named for the burning of Moscow in 1812 during the Napoleonic war (see OSNB, for instance  https://scotlandsplaces.gov.uk/digital-volumes/ordnance-survey-name-books/ayrshire-os-name-books-1855-1857/ayrshire-volume-33/39 ). On the other hand, the local pronunciation is not MOScow, but MosCOW, which may still suggest it had an older origin. There may be a local parallel, Mossculloch in Kilwinning parish, which is recorded as Moscolheugh in 1661. I would understand that as *Moscoll-heugh, that is, implying an existing name *Mos Coll, but there are other ways to interpret the name.

(Note 2) Maxwell 1930, took Mossfeather as ‘Peter’s peat moss’, but there are various objections to this, and feadhair seems more secure. Although this word is not well attested in Scottish Gaelic, it may be related to Early Gaelic fidair, fíadair ‘bush, heath’. Alan James (BLITON, under maɣl, me:l)seems to refer Mossmaul to Welsh mael ‘prince’ or moel ‘bald’, but the phonology suits the Gaelic word much better.

(Note 3) In these examples, it is hard to explain the specific elements as Gaelic—they look more likely to be Brittonic, see for instance in each case the Welsh words ffynnon ‘spring, fountain’; pebyll ‘tents’—but in Scotland perhaps ‘shieling’; and pawl ‘post’. The locations of all of these, however, are distinctly boggy. It is not impossible that Old English mos was also taken into Northern Brittonic in the same way as I am suggesting it was taken into Gaelic. It should probably be mentioned that there are some potential Brittonic explanations for some of the other south-west names in moss.

(Note 4) It should be cautioned that in Scotland north of the Forth, it may be that the word was taken into Gaelic at a different point in time, and from Scots. Certainly, Mossmorran, mentioned above, looks like it was originally mòr-mhòine ‘the big bog’, and later had moss attached to the front of it (see https://fife-placenames.glasgow.ac.uk/placename/?id=10, and Taylor with Márkus 2006, 47-8). This point needs further exploration.

Taylor, Simon with Márkus, Gilbert, 2006, The Place-Names of Fife, Volume 1. West Fife between Leven and Forth (Donington).

Watson, W. J., 1926, The History of the Celtic Place-Names of Scotland (Edinburgh)