By the time Galloway Glens place-name database is completed it will contain around three thousand place-names.   Most of them are  the names of fairly substantial features of the landscape: mountains, rivers, villages and farms.   Some of them are a little more modest – smaller burns and houses, mills and little hillocks.

But there is a small group of names which refer to much smaller objects in the landscape:  a thorn-tree here, a little boulder there, a small pile of stones or a tiny spring of water.  We call these names ‘microtoponyms’ – the names of small places (as opposed to small place-names).  These ‘small places’ are often things which have no particular significance of their own, and in most circumstances would not have been given a name.  Most rocks lying around in a field don’t get named.  But if you are defining the boundary between two neighbouring farms, and you want to describe that boundary in a charter or some such legal document, you need to name the objects that mark the boundary.  Objects insignificant in their own right become important when they are lying on a boundary.

We can see an illustration of this in a rather nice estate-plan of 1768, showing the lands of Earlston and Barskeoch (respectively in the parishes of Dalry and Kells). 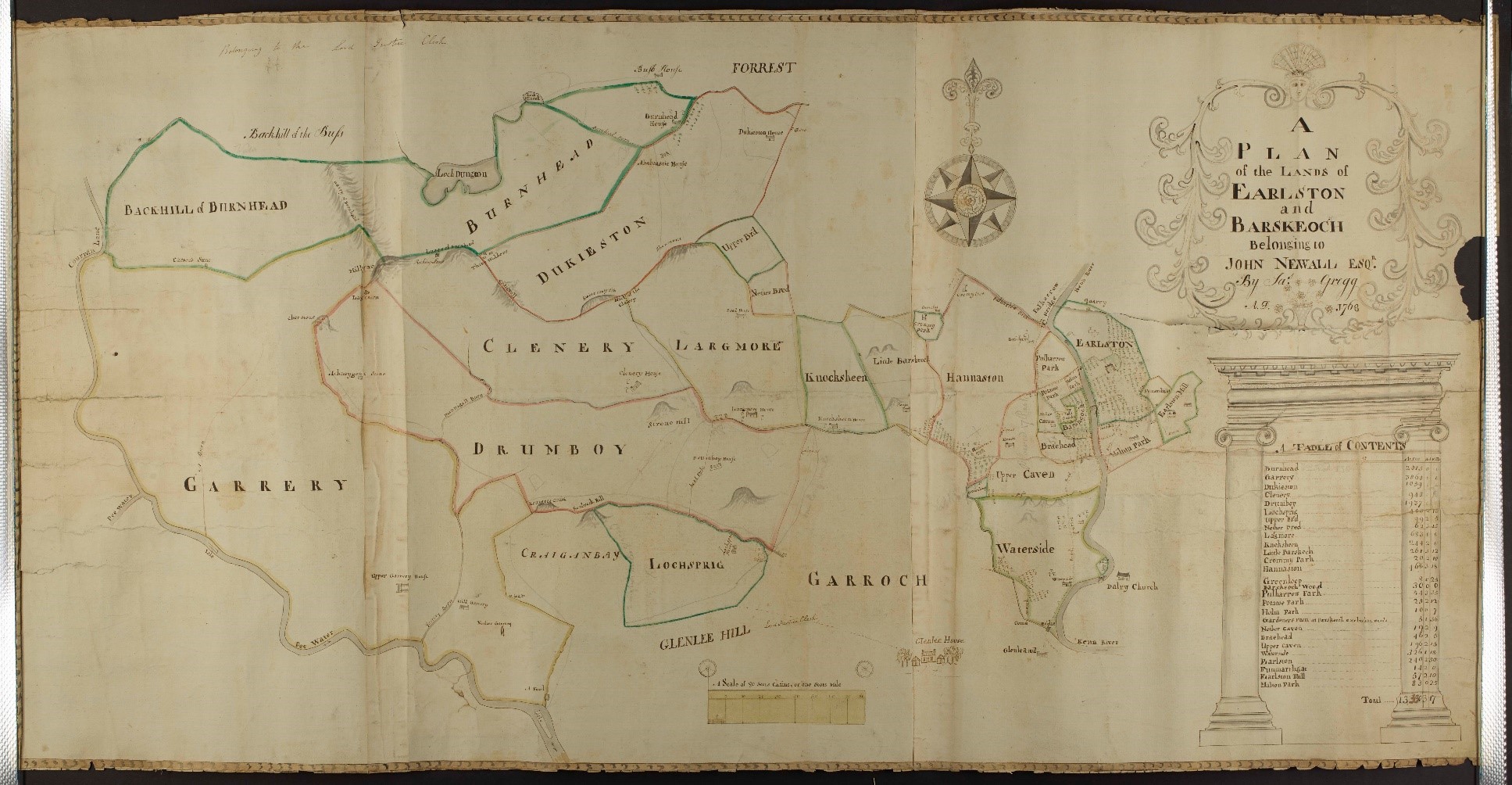 The majority of the names on the map are large-scale features: farm-names, each one with its principal house marked and named, or (clustered around the Water of Ken and Earlston) some field-names.  But in the north-western part of the map, in addition to the names of farms (Garrery, Burnhead, Drumboy, Clenery) we find a whole series of microtoponyms.  Here is a detail of that map showing them:

I have not yet been up to visit this part of the country to see if any of them are identifiable on the ground, but hope to do so soon.  The striking thing about these names is that almost all of them are boundary-markers (boundaries are drawn in colours on the map) between various neighbouring farms.  Their positions can be more or less identified, especially if we use the larger named objects to locate the smaller ones.

In the far west Carson’s Stone is a boundary-marker.  It is still marked as Carsons Stone on OS Explorer map at NX 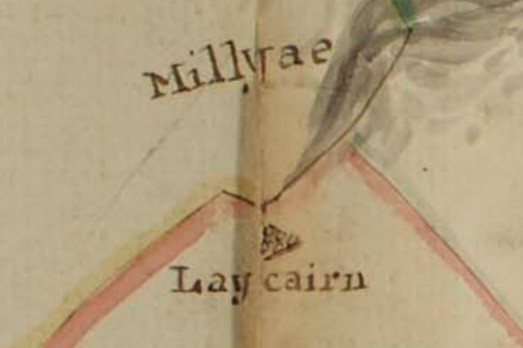 Millyae is a peak in the Rhinns of Kells, now called Meikle Millyea (to distinguish it from its ‘daughter peak’, Little Millyea, 1500m to the south).  Millyea is Gaelic meall liath ‘grey lumpy hill’ (the th of liath is silent).  It is at NX518828.

Lay Cairn is drawn on the map as a regular pile of stones, such as are commonly used to create boundary markers.  The cairn element is obvious; the Lay part of the name is probably an echo of the Gaelic liath of Millyea – a name which was perhaps no longer understood when the name Lay Cairn was coined, when Gaelic was no longer spoken in this area.  Or could it be a part-translation of an earlier Gaelic name, càrn liath ‘grey cairn’?

On the plan, the nice triangular symbol for the man-made cairn or pile of stones is clearly not drawn to scale – if it were it would have to be about 300 metres high.

Clear Stone is at about NX512815, at a point where the the boundary takes a turn to the south-east. The change in the boundary line direction is still apparent here on modern OS maps where the Forestry Commission boundary continues that old farm division.

Further south, Achneygour Stone (NX519813) is unusual in that it does not mark the boundary, but lies about 300 metres north of it. Given that it is not a boundary-marker, there must be something about this particular 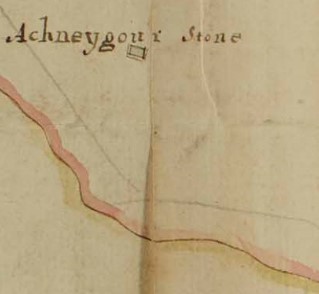 stone that made it interesting enough to attract a name.  Achneygour is Gaelic, being achadh nan gabhar ‘field of the goats’.  This is another site to visit, and perhaps an interesting rock to photograph in the future (watch this space!).

All the names discussed so far have been running south along the north-eastern boundary of Garrery  (modern Garrary) which is garbh àirigh ‘rough summer-grazing land’.  It is certainly rough, and high exposed ground that could only be grazed in the summer months.  For the rest of the year the herds would have to be kept in more sheltered ground.

If we go back to Millyae and go east instead, we follow another boundary (between Burnhead and Clenery, now OS Clenrie, = claon àirigh ‘sloping summer-grazing land’).   Here Rocking Stone is a boundary marker, and again it is crying out for a visit – and perhaps a wee push to see if it still rocks.  Then come the Three Wedders.  I suppose that these are three large boulders – they are marked on the map as three completely rectangular objects (like Rocking Stone), but I suspect that is the map-maker’s conventional symbol for a rock, rather than an actual drawing of the objects.  They seem to be at NX536637.  Again, a visit is required to these stones, which mark the place where three farm boundaries meet.

So a small object which might have no intrinsic interest is loaded with meaning by the fact that it lies on a boundary.  And because it has meaning, because it has legal weight, it requires a name.  It’s a little insight into the way that place-names are created, and the social and legal life that lies behind that naming. 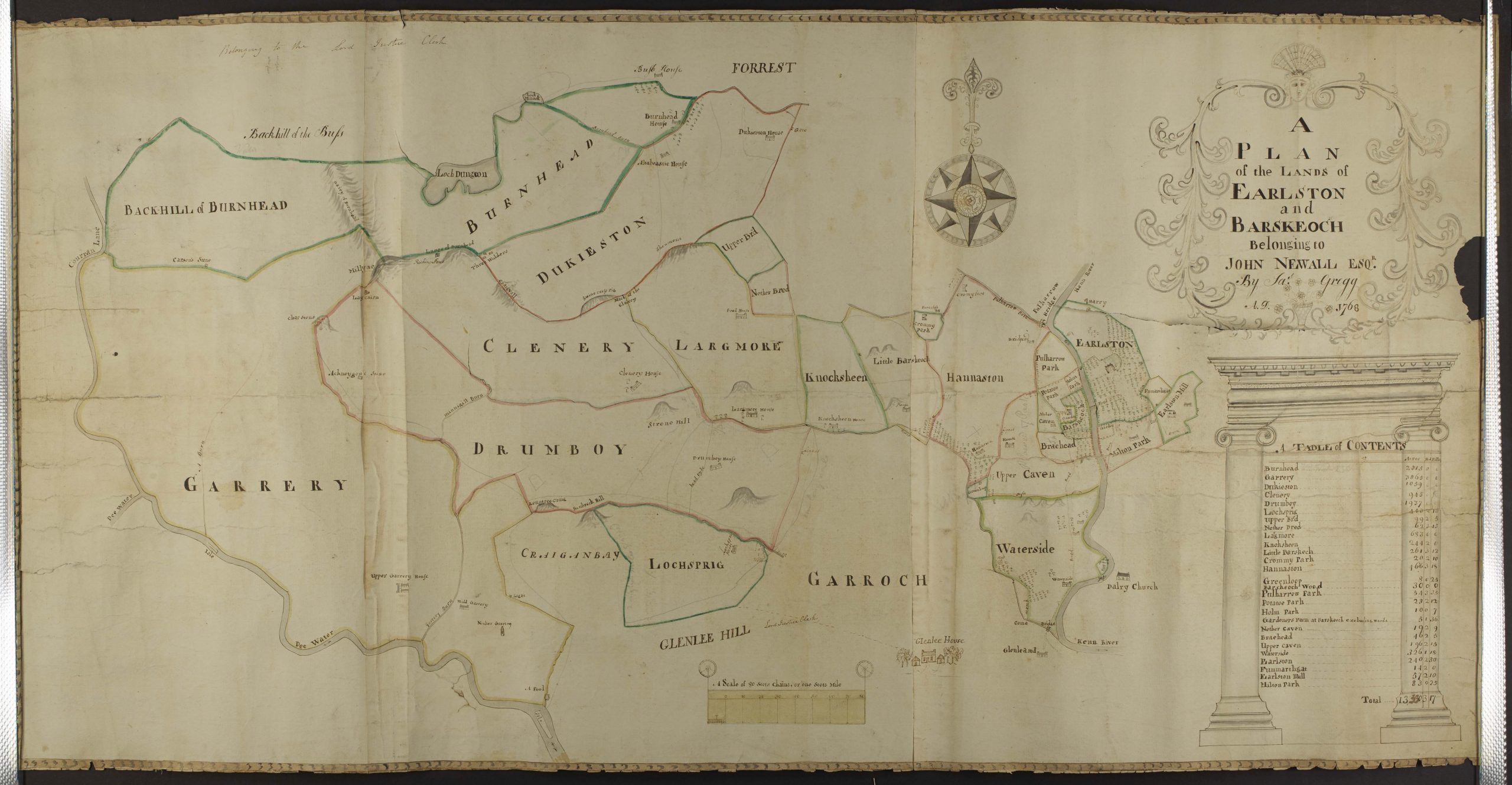