The interest of place-names lies in the glimpses they can give us of human lives in the past.  How did people live together?  How did they see the landscape around them?  How did they make their living?

In the Galloway Glens making a living meant, among other things, keeping warm.  The minister of Parton parish wrote in the 1790s, ‘Peat is the general fuel. It is scarce in the southern parts; and the poorer sort of people use broom and furze. It is plentiful in the middle and eastern parts, and of the best quality.  The mosses are of difficult access, as no proper roads are opened.  The inhabitants are obliged to carry home their peat on horse-back in corn sacks, as carts cannot be used’ (OSA i, 188).

The poor burn ‘broom and furze (i.e. gorse)’, because they can’t afford peat, and they haven’t got access to a ‘moss’ or peat bog.  A moss was clearly an important resource for those who had one.  It was the place where you would dig your peat, stack it, dry it, bring it home on horse-back’ (because the ground was too soft and boggy for a cart).  It was perhaps also a place where, in the drier summer months, you could graze a few beasts.

There is a large tract of moss in the southern part of Balmaghie parish.  It is basically one moss, but it has three names:  Drumbreck Moss, Bargatton Moss and Barend Moss.  The large tract is subdivided into three more or less equal sections, all lying in between the farms of Drumbreck, Bargatton and Barend.  Each farm has access to its own section of moss.  The boundaries between them, by the mid-nineteenth century, are defined by fences.

We may think of a bog or moss as a shapeless, trackless, undifferentiated sort of thing.  But in times when its peat was a vital resource, it was managed, demarcated, named in sections, jealously guarded.  Such clarity meant that the farmer at Drumbreck didn’t need to fight the farmer at Bargatton over access.  Such naming was a way of keeping the peace.

The poor, on the other hand – well, they can burn broom. 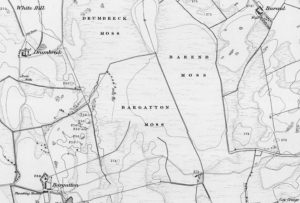