When I’m working in the Galloway Glens, trying to figure out how place-names and landscape fit together, I’m often disturbed by the piercing cries of the numerous red kites (Milvus milvus) that now live in the area.  I quite regularly see them wheeling overhead, sometimes alone, sometimes in considerable numbers.  You can hear their sound here: http://www.redkites.net/section193338_89805.html

These birds became completely extinct in Scotland in the nineteenth century, thanks to human persecution – much of it by the owners of ‘sporting estates’ seeking to maximise grouse numbers for shooting. But the red kite has recently been reintroduced in some places where it is now doing rather well.

The old  Scots word for ‘kite’ is gled.  And there are several place-names in the Galloway Glens which contain this word (often in the local dialect form glede).  Glede Craig, for example, is a rocky knoll on a hillside at 490m altitude.  According to OS Name Book ‘it is a resort for kites which are commonly called gledes in this country’.  Another place-name is Glede Bog, a rough pasture just outside Carsphairn village at the much lower level of 165m.

The Gaelic name for the kite is clamhan gobhlach (‘the forked clamhan’ – look at the tail in this photograph – the word clamhan on its own usually refers to the buzzard).  I have been looking for place-names containing clamhan, but have yet to find one in my patch.

We can’t be absolutely certain that all our gled-names referred originally to kites.  The word was also used (perhaps in later periods) to refer to buzzards, and even to other birds of prey such as sparrowhawks and hen harriers (grey gleds).  That is certainly a complicating factor. 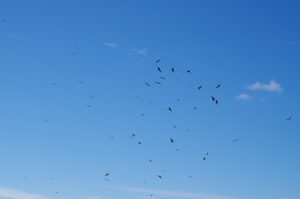 One of the features of the red kite, however, is that unlike buzzards and other hawks it is a bird given to forming large flocks.  You can see fifty or sixty at a time in Balmaghie parish, where this photo was taken.

Not only do they fly around together in large numbers, they also roost together. 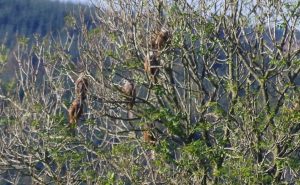 We might wonder, then, what gled place-names refer to.  Are they favourite roosting-places for kites,  where dozens might spend the night together in the trees?   Or are they productive feeding-grounds?  Kites are pretty opportunistic scavengers, but also  eat worms and beetles, and will also occasionally hunt live prey – mice, voles, young rabbits and smaller birds.

The kite population in the Galloway Glens, in the years since its reintroduction, has tended to be concentrated in particular areas.  But as the population increases and moves further afield, it will be interesting to see if Glede Bog and Glede Craig and other such places become once again places of notable kite activity.