In this project, Place-Names of the Galloway Glens, we will be exploring one of the key areas that the Galloway Glens Landscape Partnership has highlighted–the ‘intangible heritage’ of the landscape. The names that surround us can often become an unremarked, unnoticed part of our world–when we pay attention to them, and understand where they come from and what they mean, they can often illuminate the past in important ways.

Language is one way. Several languages have contributed to Galloway’s landscape. The language we will call Northern Brittonic (sometimes called Cumbric), closely related to Welsh, is one of them. Not very many names survive from this language, but perhaps we will find more in this survey. (One example is the lost original name of Balmaclellan, Trevercarcou ‘the settlement of the … [something no one has figured out yet]’). Likewise, there may be a few names derived from Old Norse, a Scandinavian language spoken by some of those who ruled over this area in the 10th and 11th centuries. Grobdale in Balmaghie parish may be from this language.

The two languages contributing most to the landscape are Scots and Gaelic.

Place-names show us how prominent the Gaelic language was in the past. Six of the seven parishes we will be surveying in this project have, at present, Gaelic names (Carsphairn, Dalry, Kells, Balmaclellan, Balmaghie, Crossmichael). A later blog will explore these parish names for what they can tell us. But certainly two of these names belong to the period of the high or later middle ages, because they incorporate family names which only became a feature of how society worked in that period. Balmaclellan and Balmaghie contain word baile ‘farm, settlement’, followed by the surnames Maclellan (Gaelic Mac Gille Fhaolain) and McGhie / McGee (Gaelic Mac Aoidh). As can be seen, such place-names also tell us about local society, families, and politics–they can reveal aspects of ownership. Crossmichael contains the name of a saint, and the original name of Balmaghie, Kirkandrews, also contained the name of St Andrew. Saints allow us a way in to the religious development of Galloway in the past.

Some names which appear to be Scots may in fact come from a much earlier period in Galloway’s history, and derive from Old English, the language spoken in the early medieval kingdom of Northumbria, which ruled Galloway from around AD 700, and ran the church as the diocese of Whithorn from around the same time. A parish name like Parton is a case in point. It probably derives from Old English port tun ‘settlement at a harbour’, referring to its situation on Loch Ken. But in fact, the name could have been created at any time from the 8th century until its first recording c.1275. Many Scots place-names are more obviously recent, however, such as Thorniehill, Blackpark, Kirkland.

But as well as the human dimension of the past, place-names can illuminate the natural environment of the past, whether this be the type of land (Laggan ‘hollow’; Monybuie ‘Yellow Bog’); or flora (Arndarroch ‘oak-grove portion’; Barscobe ‘broom hill’) or fauna (Polmaddy, ‘the burn of the wild dog’; Glede Hill ‘hill of the kites’).

Over the next few years we will be researching all these names, and making new findings and interesting musings available via this blog. Stay tuned! 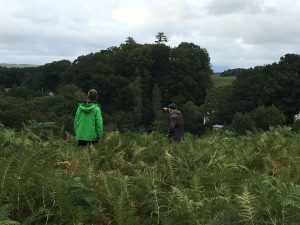 Gilbert Markus and Simon Taylor surveying the landscape from the motte, Dalry.